Gold Award "GURENGE"
Following last year, "GURENGE" composed by KUSANO KAYOKO and written / performed by LiSA has won the Gold Award once again. "GURENGE" was written as the theme song for TV animation "Kimetsu no Yaiba" (Demon Slayer), and the animation series has been a long-running online video hit to this day. For two years straight, its popularity in online music services has landed the song in the number two position in the amount distributed by JASRAC for interactive transmissions. Besides an arrangement of the song making a buzz in an advertisement, "GURENGE" was also widely supported in karaoke and broadcasts, making it the fourth song in the history of the JASRAC Awards to win a Gold Award for two consecutive years.

Silver Award "HOMURA"
The Silver Award has been awarded to "HOMURA," written / composed by KAJIURA YUKI and written / performed by LiSA. It was chosen as the theme song for the film "Demon Slayer: Kimetsu no Yaiba Mugen Train Arc ," which was released in October 2020 and became the highest-grossing Japanese film of all time. "HOMURA" was released simultaneously with film and swept the charts, earning number one on Billboard JAPAN's Download Songs chart for the first half of 2021 and winning the Grand Prix at the 62nd Japan Record Awards in 2020. The song has ranked first in the amount distributed by JASRAC for interactive transmissions and is in the fourth place for performances and karaoke, making it a Silver Award winner.

Bronze Award "DRIED FLOWERS"
"DRIED FLOWERS ," written and composed by YUURI, has been awarded the Bronze Award. Released online on October 25, 2020, the song went viral on social media and YouTube, ranking first in the amount distributed by JASRAC for performances and karaoke and third for interactive transmissions. Billboard JAPAN's 2021 Year End results saw the song taking number one on the Hot 100 chart as well as in karaoke, streaming, and download categories. The song became widely popular and is the first song by a solo artist to achieve more than 600 million streams, resulting in the Bronze Award. 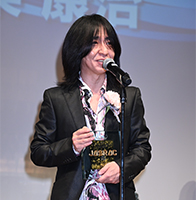 Foreign Work Award "Dynamite"
"Dynamite," written by JESSICA AGOMBAR and DAVID STEWART and performed by South Korean group BTS, has won the Foreign Work Award. The song was released on August 20, 2020 as the group's first song with all-English lyrics and debuted at number one on the U.S. Billboard Hot 100 chart. It became a worldwide hit and was also nominated for a Grammy Award in 2021. Streamed more than 600 million times and gaining great popularity here in Japan, especially through online distribution, "Dynamite" has been awarded the Foreign Work Award.