■ What is KENDRIX?
KENDRIX is a DX platform for creators based on the concept "To a world where every creator can take part in the Creation Ecosystem." It aims to enable music creators to securely release their works and to lower the barriers of various procedures required to receive legitimate remuneration.

The name KENDRIX is an anagram of KENRI ("rights" in Japanese) and DX (digital transformation).

■ Developmental background of KENDRIX
As streaming services establish their positions in the music industry, the number of individual music creators who handle everything from production to marketing and distribution by themselves (so-called DIY creators) has risen.

Meanwhile, there are issues for these creators - such as having no means to counter unauthorized use and spoofing of their music, difficult and complicated schemes for royalty distributions and affiliation/work registrations with JASRAC - which set the bar high for utilization of existing copyright management systems.

JASRAC embarked on developing a management tool for musical works information to solve these issues, conducting a series of demonstration tests in preparation for its release with cooperation from music creators.

■ Functions of KENDRIX
When creators register their music (audio files) with KENDRIX, the following information will be registered on the blockchain (files in the process of production can also be registered):

・Hash value of the audio file
・Time stamp
・User information, title and version information (multiple audio files can be registered to a single musical work information as their versions)

Based on the above, KENDRIX enables objective certification of when and who owned an audio file and publication of a "PoE page" displaying the information registered on the blockchain.

When releasing musical works on online distribution platforms and social media, creators can attach the URL of the PoE page. This will let third parties know that the creator has acquired PoE, which is expected to act as a deterrent to illegal use. 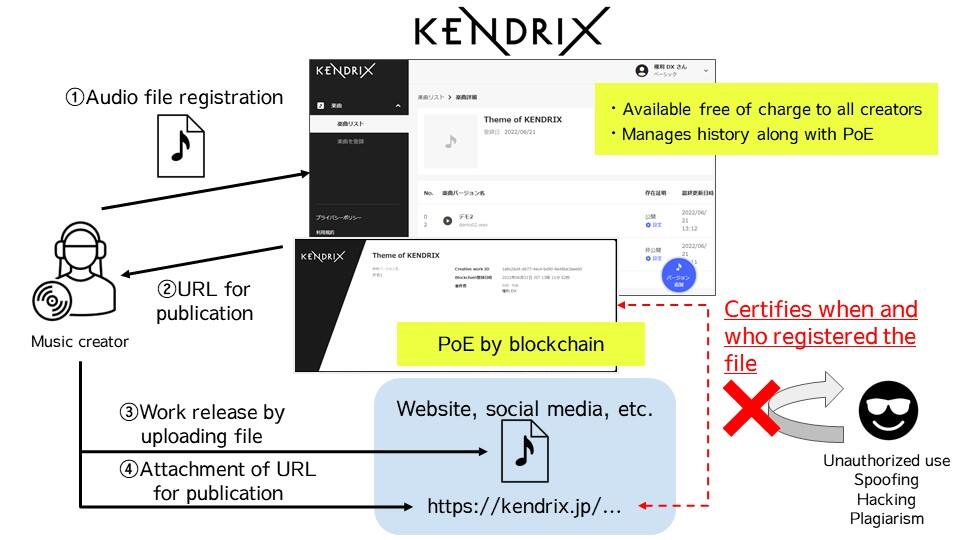 Around 10 music creators will be acting as test users of the closed β version. After receiving their reviews and feedback, functions will be improved and refined for public release.

■ Official launch of KENDRIX
In addition to PoE based on blockchain technology, KENDRIX will be equipped with features such as an e-KYC based online contracting function before it is officially launched free of charge to the public in October 2022. Updates on KENDRIX's release will follow.

JASRAC will continue to support the activities of music creators through the utilization of technology.